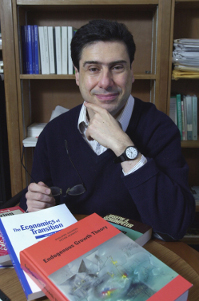 Philippe Aghion is a Professor at the College de France and at the London School of Economics, and a fellow of the Econometric Society and of the American Academy of Arts and Sciences. His research focuses on the economics of growth. With Peter Howitt, he pioneered the so-called Schumpeterian Growth paradigm which was subsequently used to analyze the design of growth policies and the role of the state in the growth process. Much of this work is summarized in their joint books Endogenous Growth Theory (MIT Press, 1998) and The Economics of Growth (MIT Press, 2009), in his book with Rachel Griffith on Competition and Growth (MIT Press, 2006), and in his survey “What Do We Learn from Schumpeterian Growth Theory” (joint with U. Akcigit and P. Howitt.) In 2001, Philippe Aghion received the Yrjo Jahnsson Award of the best European economist under age 45, and in 2009 he received the John Von Neumann Award.